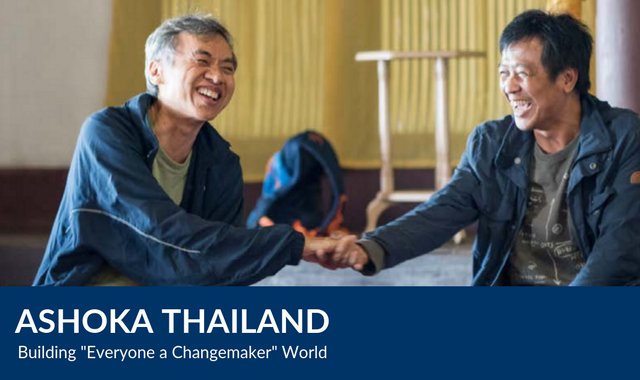 Ashoka envisions a world in which everyone is a changemaker: A world where we are all empowered to contributions to positive change. Ashoka is a global network addressing the world’s most pressing problems by convening and supporting groups of changemakers. We identify and accelerate social innovations when we find it. Ashoka supports an "Everyone a Changemaker" world through its programs in more than 90 countries, building and amplifying this global movement in three stages:

Ashoka Thailand has been operating since 1989 and has helped accelerate the work of 108 social entrepreneurs (Ashoka Fellows) through Ashoka Fellowship programs. 90% of fellows have indicated that Ashoka’s financial support has allowed them to fully commit to their idea and impact. 86% of fellows have stated that Ashoka has helped them see their work at a systemic-change level and 84% have said that Ashoka helped increase their impact. Ashoka has also bridged resources, both financial and partners, for fellows in scaling up their work through multiple programs and collaborations such as Na-Lak-Pa (นาแลกป่า) Project in Nan province, Trainkru.net, Trawell, Local Alike community-based tourism management, Grassroot Innovation Network, Social Innovation for poverty alleviation in 3 southernmost provinces, Buddy Homecare, etc...

The targets for Ashoka Thailand for the next year are;

We are looking for passionate individual to become “Ashoka Giving Circle” member. These are individuals who share Ashoka’s vision in supporting social entrepreneurs and mobilize national community that embraces the new frameworks to build “Everyone a Changemaker” world. Engage with us and embark on a personal transformative journey in being a part of the community fostering for social change.

By becoming a member of Ashoka Giving Circle, you will;